Some days it depends which side of the counter you are on.

When I was young and worked in a film company, we had an entire department devoted to customer service. Times sure have changed.
Hubby and I went to a different car dealership than the one I previously wrote about. We drove in his car. A very young man invited us into his office and we discussed a trade in. I asked for a ballpark figure for trade in value on my make and model. He said, "You don't have your car here. So I can't answer you. We have appraisers who decide that."


I said, "A rough estimate? A blue book figure?"
He looked at me very suspiciously, then said, "FINE! But if you take me to court for what I am quoting you, I will sue you!" He glared. "Believe me. I will! Both of my parents are attorneys."


I laughed, thinking he was joking, and I said, "Then they probably would tell you not to be so contentious."
He said in a very staccato voice, "No, my parents do not say that to me."


Then I realized, this young man is probably on the autism spectrum. Wonder how many cars he's sold for dealership?
So I bought this car instead. Can't you see me zipping around town in it? Waving like the queen? 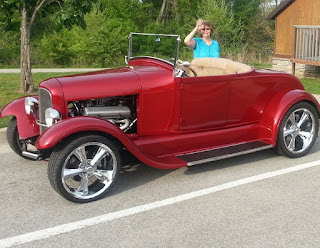 Not really! I saw it and had to pose beside it. The saga of poor customer service continues...


Midday, I went to a thrift store. Two young women cashiers worked an aisle apart.
# 1 says loudly to #2,"You really made $500  for one night bartending? Dang, soon as I turn 21 next year, that's what I'm going to do."


# 2 "Well you better believe it... blah-blah-blah"
A man wishing to check out asked #2 if her register was open.
#2  "Hey, there are only three people in that line. Go over there with her."


He cursed under his breath as I stepped in line behind him.
Meanwhile the four people in line ahead of me were getting more and more upset at the girls bantering. Why would #2 be working at a thrift shop if she earns $500 a night?


First customer in line checking out had a cart full. Cashier #1 started talking about the customer's merchandise, holding items up and showing them to #2 who was popping anti-theft tags off used clothing, probably bound for the rag pile.
I bristled for five minutes, and then I could take it no more. I tossed my merchandise and murmured to the guy in front of me, "And this is why I no longer shop at this store."


He called them a few choice derogatory names and said loudly to me, "I don't blame you!"


You think I should have called for a supervisor?

Kids are bosses. Many are running fast food restaurants, goofing around with one another in front of customers. Customer service is not what it used to be.


In the evening, we went to Taco Bell for dinner. We were the only customers inside. The young man waited until we sat down and then started mopping the floor area right where we were seated, not across the room. I don't understand it. I suppose that yellow caution cone that announces WET FLOOR is supposed to prevent a law suit.
Hey, I know a guy whose parents are both attorneys.
Have you had any customer service concerns lately?
Posted by Linda O'Connell at 1:24 PM

I called the front desk at a Holiday Inn Express on Saturday, to ask for the code to connect to the free internet. That's all. It's not like I took the advice in their three-ring binder and called to ask HOW TO SET UP MY COMPUTER to connect. All I needed was the code.

"It's in your key card folder." I doubt that I, myself, could have sounded more put-out than she. And I'm a master. Then she grudgingly told me the code. A common word with a number after it. How hard was that? Is it not what she's paid to do?

Seriously. She had to know I was calling from INSIDE the hotel. It was on their own phone line, probably showing my room number as well. It's not like I parked on their lot to scam free internet. Not my fault that my husband took the key cards and tossed the little folder away.

I agree that customer service is definitely not what it used to be. Some days it seems practically non-existent.

The "friendliest store in town" closest to me is the most unfriendly grocery store. I only go there when I'm desperate (and Aldi's isn't open).

Hi Linda.
Yes, customer service has a long way to go. There is one supermarket where the staff members are so rude that I almost never go there. What would a friendly "hello" or a smile cost them? Nothing. Instead, customers go elsewhere and the store loses. Who wants to be around a frown face? Susan

I so hear you here! While the world of the past needed to relax a bit on rigid rules, the rules of civility were worth keeping. Now no one seems to have any guidelines on their behavior and well, it is a mess!

Why didn't you buy the car? That beauty would be so much fun to drive around.