It was a beary fun day.

Is this not the cutest little face you've ever seen? Liam was at his grandma Tracey's house. 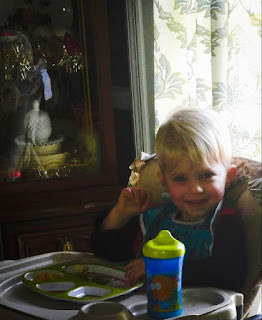 And do you think he would dare smile when he was seated on my lap? Of course not. 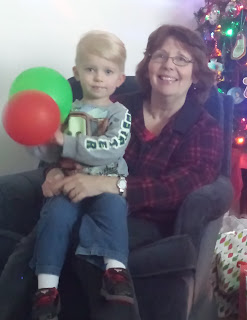 I took him to a neighborhood house decorated with hundreds of Teddy Bears and bear scenes. 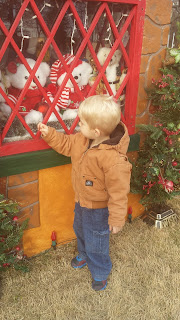 We went home and watched a National Geographic movie, Santa Claus and the Arctic Animals. 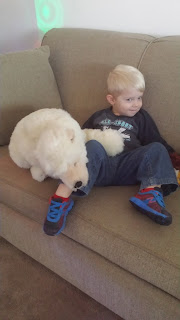 When we went to Wal-Mart later in the day, Liam saw the over-sized Teddy bears. He liked them from a distance. I put a big Teddy bear in the cart, thinking he'd be thrilled. When he discovered it, he said in a little squeaky voice, "No?" As I tried to coax him, his protests grew louder, No. No-No-No. NOoooooo!" The idea of the big Teddy bear was safer than the reality of it. 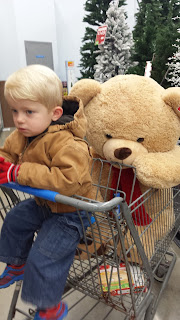 Are you ever eager to attempt something, and then when you realize the gravity of the situation, do you back off, or reconsider? Thinking about it is different than actually doing it. Would you agree?

If we don't take risks and address our fears, how do we overcome them? As I always told my students, "Never say, ' I can't.' Always say, 'I can try.' "

Is there something holding you back? Something you would like to do, but are hesitant about? Step out in faith and at least make an attempt. Never read at an open mic? Give it a try. Considered submitting to publications and then thought they were out of your league? What's the worst that could happen? A big growly bear is not going to bite your head off. You might even find success instead of failure.
Posted by Linda O'Connell at 6:58 PM

I lost my fear of trying long ago! Unless it is a physical feat that my joints no longer allow, I am up for adventure.
Your dry cookies that you forgot to add enough butter to, don't toss them!! Crush them and add some cream cheese and butter, roll into balls and dip them in chocolate coating. Then take credit for making a "new" cookie!!

That IS the cutest little face I've ever seen! That bear is definitely getting the cold shoulder.

Linda--I read Kathy's comment and thought you could take the dry cookies, smash them up (a bit) and use them as topping for a cake. Or frost some brownies and add the cookie crumble to the top. Just an idea...

Liam is a doll, whether he's grinning or looking terrified.

As far as holding me back, I think earlier rejection has made me gun-shy when it comes to certain projects. I know that's not the right attitude. I know that even world-famous books like Rowling's first Harry Potter book was rejected many times... and yet I still hesitate.

Today's post was timely for me, Linda. Thanks for being the extra push. :)

Love the expression on Liam's face with the big bear lurking behind him. He is SOOOO not on board with that idea.

Yep, fear can make your life very small. Great words of wisdom, Linda! And a ridiculously cute Liam, too! :-)

Well I think Liam had a little smile on his face in the photo with you, Linda. He is a doll with or without a smile. Merry Christmas! Hope you and your family have a beautiful and blessed one. Susan

Liam is such a little sweetie. Merry Christmas to him and to you all and a Peaceful and Healthy 2017.

These are cute pictures of Liam. I can understand why he might feel a little intimidated by that giant bear! Merry Christmas to you and yours!