Talk about confused. Last week we had freezing rain and ice. Then a warm spell with temperature of 68 degrees. The sedum, a hearty plant, has already started to sprout. 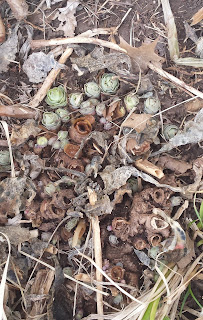 Then a few days later, while there was still a thin sheet of ice on the park lake, the sun came out and the temperature soared again. I asked hubby to stop so I could walk around the lake. I spied this canteen at the base of the tree. Then it moved its head. Turtles were coming out of hibernation. In the middle of January we are experiencing spring temperatures. I am not complaining. The weather man said this morning that conditions are ripe for a big snow...if it were cold. I am thankful that we are a day closer to spring and don't have the white stuff. The ice storm fizzled, even though every precaution was taken and metropolitan and counties closed down last weekend. THIS weekend we will have way above normal temps. This is wild. 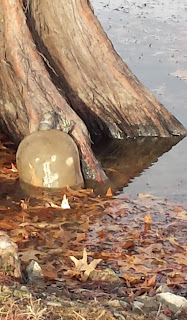 Now as if that isn't confusing enough, Liam's mom went for her ultrasound. She was 7 weeks and 5 days pregnant. The baby measured 3 and 1/3 inches long. At this stage it's supposed to be the size of a kidney bean, not a french fry. Hmm, maybe she's further along. They will know on Valentine's Day. Meanwhile she's worried she's having a  giant baby. Right now the due date is near Bill's birthday, and we are all excited!

Some of you may already know my step brothers who live in Florida are both hospitalized in ICUs at different hospitals. Steve was involved in a head on collision and suffered extensive chest/abdomen injuries and aortic tear. He's had seven major surgeries in 9 days, and I am waiting for an update.

John developed an infection which went into his blood stream, probably from pneumonia. Both were on life support, but showing improvement as of Monday night. Would sure appreciate prayers for Steve and John Cooper. Thank you.

Leave it to a former military wife to see a canteen in the lake! I would see a canteen and think TURTLE, and wonder why it didn't move.

Positive thoughts have been sent out for both Coopers.

Yes, think the confused weather leads to our own feelings of confusion for sure. It seems in old days we had winter, lived through it and then went to next season. Now it is yo-yo stuff. Sorry for the two step brothers...will pray all goes well and for healing.

We had crazy weather like you maybe it's all over the world.
Sad to hear about all your troubles hope all goes better soon.
Merle...............

Have been praying for your brothers, Linda. God is good. Nice to know Liam will have a sibling! As Melanie in GWTW said to Rhett once, "The best days are when babies come." And the weather? Don't even get me started. LOL

Our weather here has been unseasonably warm too. I'm not complaining, though, because I don't miss the snow at all. Maybe you will have a new grand baby sooner than you thought!

My peach trees were budding! I hope this does not confuse them. I didn't get peaches last season and I want peaches this year!! Hope the men continue to improve and are able to get back to their homes soon!

Our weather has been bizarre. When I was a kid (I know, I know) winters included lots of snow and enough freezing days to skate on the lakes at Busch Wildlife. Now...not so much. It does seem we're experiencing something not-so-good with climate change.

Will continue to pray for your brothers.