He was no Paul Bunyan, and what else don't I know?

https://en.wikipedia.org/wiki/Robert_Wadlow for more info check out this safe link. You might have to ckick twice. Find out his cause of death and many other facts.

When Robert Wadlow was born, he weighed 8lbs 5 oz.

The Gentle Giant was born in February 1918 with hyperplasia of the pituitary gland, which resulted in an abnormally high level of human growth hormone. Wadlow’s greatest weight was 493 pounds. He was still growing at the time of his death in 1940; at age 22, he was 8’11” inches tall. 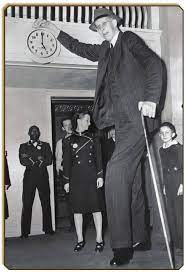 Wadlow was the tallest person on earth. He lived across the river in Alton, Illinois, a St. Louis, Missouri border state.

While watching a documentary on him this morning. Bill said, “They didn’t mention that he played cards with my grandpa back in the 1930s in the house I grew up in. No, I didn't know him. He died before I was born.”

The things you find out after decades of marriage!

There's a Missouri woman who had a similar condition-Ella Ewing. She toured with Barnum and earned enough money to build a house for her family. Interesting story!

At one time, there was a combination Underground Railroad/Robert Wadlow museum in Alton. You could put your foot onto Wadlow's footprint to compare.

It's an interesting museum, or at least was. (I took a group of students there for a field trip decades ago--not sure if it's still there.)

One of my best friends in high school was a Wadlow. She said she was a distant relative. Very distant, we assumed, since she was 5'4".

Seeing the Wadlow statue is on my bucket list. We've been in and around Alton many times, but just haven't made it there yet.

Sad. Nobody wants that kind of fame. Probably he, his parents, and siblings, suffered enormously.

That certainly is a TALL man!

Grandson Russell knows many facts about him - I think he read it in a book. When asked trivia questions about him, I missed every one of them. Had I known Bill had an almost brush with fame with the guy, I might have done better!