On September 11, 2001 I was stunned, like every other American. I didn't know what was going on or what to do. I felt compelled to give students a voice. This true story was published in Chicken Soup for the Soul, The Spirit of America, 2016 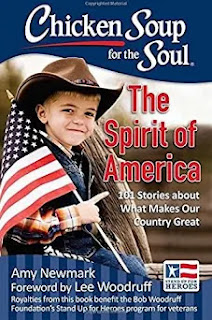 The Feelings Flag by Linda O'Connell

I stood in my living room and cringed at the sight of the first plane hitting the first tower. I did not realize the horror had only just begun. As I drove to school I listened intently to the reports. Then, I heard that another plane had crashed.

I was as shocked and stunned as every other adult in my school. No one was sure what was going on. Teachers were asking one another, "Did you hear about the plane crashes in NY? Is America under attack?"

It was like a punch in the gut, beyond our comprehension. Everyone felt winded, worried, and wounded.

"Calm down," I said. "Don't jump to conclusions. Nobody knows for sure what's going on. This does not mean war."

I walked into my classroom and watched as my students went about their school day, unaware of the attacks. My aide was capable, so I left her in charge.

I felt compelled to do something patriotic to relieve the mounting tension and confusion the middle school students were feeling, although I was not in charge of any of them. I cut
twelve-inch by two-inch strips of red, white and blue construction paper strips, the kinds kids use to create paper chains. I did not consult the principal or counselor. I acted on impulse. I visited each classroom and intruded on classroom teachers. I asked each if I might have a moment, then I said, "Nobody knows exactly what is going on. We've all heard rumors and news reports. It's a frightening time for all of us."

I collected more than 200 strips and rolled them into loops, then I stapled them to the bulletin board in the cafeteria. I read an outpouring of emotional comments. "I am afraid." "I want to kick their butts." "Bomb them." "Why did this happen?" "What now?" "I want to go home."

I posted one after another, row after row, until an American flag took shape. Some of the comments were laced with misspelled words and profanity; some were smeared with tears. I did not censor. I rolled each into a loop and stapled every single one. I stood back and gazed at our"feelings flag".

On that horrible day, when America came under attack, I didn't know if my actions would do any good. It just felt good to do something. My friend Tammy said, “With that spontaneous action, you gave children a voice when no one knew what to say."

The bulletin board flag stayed up for more than a week. Then the strips began disappearing as individuals claimed their sections... and their feelings.

(Thank you for reading my story.)

What a wonderful story! I love seeing how your compassion and care about people was an asset as you stepped in and helped these young people give voice to their fears, yet also act in a positive manner instead of giving into the painful feelings.
Excellent!

Linda--I show the movie "The Man in the Red Bandana" (available online, for free) to my students every year. It's so moving.

Your story is moving as well. I think it's a marvelous one to share every year, to remind us...