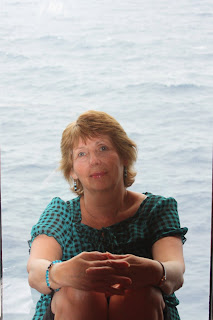 Physically I may be seated in front of a computer in this desk chair, but in my mind I am still sitting in this window seat. My intention was to write and read in my spare time, but there was no spare time. There were activities all day and into the wee hours. Most people napped everyday. I did finish a book, but the other two weren't even opened.

In the Cayman Island (owned by the queen of England) we passed the Ritz Carlton on
our way to the beach. We were informed that Bill Gates has the entire second floor where rooms range from $2,500 - $4,000 per night. Can you even imagine how the rich and famous live? They fly in and have access to a BMW or Rolls Royce.

I'd be satisfied with a thatch roof hut and a beach at my back door; I don't care about the fancy hotels and cars.

I think I must be having withdrawls. I'm sitting here thinking that someone else is sleeping in 'our bed', eating at 'our table'. I hope their entertainment is as delightful as ours was. That evening after swimming in the Caribbean, when we were back on board, we learned that Marcus Anthony, singer and opening act for Naomi Judd and back up singer for Dianna Ross and the Supremes had boarded the ship and was the highlighted performer. He put on one heck of a show, actually two! He sang one Motown hit after another as the audience shouted out song requests.

Sittin' on the dock of the bay, watching the tide roll away ... that's where I am right now, drifting on a memory.
Posted by Linda O'Connell at 7:17 PM

Not a bad place to be, I'd say, Linda. Happy swimming, dreaming, tanning, eating, and traveling! Susan

It would be so easy to just chuck it all and be a beach bum, eh? I know this feeling well.

Aw, I will arrive back to reality soon. I must.

Julia,
I love the sun and surf. I am born of it; it calls me and tugs on my soul.

You described it so well that now I'M having withdrawals! :-o

Boy, do I ever need a vacation!! And one that includes some white sandy beaches and rolling waves!!....*sigh*...

Tammy and Becky, is time for a little R&R? I actually saw Margaritaville in the tropics; maybe we can have our own little version one day soon. Call me.

Aw, man, you're still making me long for another cruise vacation. Maybe next year...