My grandparents and family lore 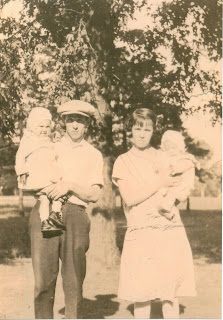 Today I had lunch with my twin aunts, Shirley and Dorothy. They are in their mid-seventies, don't see one another often, so we planned a lunch date. Sometimes they fuss and act like children; sibling rivalry ressurects itself when they are together. One of them shoots me a look and whispers something about the other behind her back, and I just nod and smile. They shared so much oral family history with me. I was absolutely thrilled; I felt like a kid in a candy store wanting more-more-more.

I noticed this old photo of my grandparents holding their first two children, my aunts, Mary and Lucille. It was taken in June, 1928. I immediately went out and made a copy. I am proud to have this in my possession. My grandfather was from Italy, my grandmother's family from Germany, and when the sparks flew and they fell in love and married, their parents disowned them. They later reconciled with their families, but I can only imagine the turmoil.

When I was a little girl, my mom used to tell me that some of her sisters were in the circus. I always thought it was a tall tale. As it turns out, my aunt Dorothy confided, when she was eight and her oldest sister, Mary (the baby in my grandfather's arms) was sixteen, their dance studio went on tour and hooked up with a circus in Mexico. The girls did acrobatics. Their mother gave the girls permission to travel, but what she didn't know was that they weren't staying in a hotel and being protected. Instead, they slept on the floor of an abandoned warehouse and were fed beans and were always hungry. Mary would come home after a date and tell Dororthy about what she had to eat. When they were performing, and one of the workers yelled, "Hey, Rube!" that meant there was trouble brewing, and the other performers and workers would run to their aid. The things I found out today. It was like paging through a family history book.
Posted by Linda O'Connell at 7:05 PM

Sounds like you had a wonderful time, Linda. Isn't it wonderful your aunts can fill you in on family history? That's awesome. And I love the photo. I don't have any of my grandparents that young! Susan

How cool - I'm sure you have it all written down! Funny that no matter what your age, if you have siblings, you still act like kids.

That's far more colorful than a history book! You are a wise woman to recognize the treasures you have. I was one of those people who didn't listen, didn't ask, didn't care...until it was too late.

What a wonderful opportunity to learn about your family's heritage! Everyone has a story to tell, don't they? Glad you had a chance to dig into your family's treasure chest and learn something new.
Blessings,
Karen

Hello Linda - love your blog - I feel when reading this we have a lot in common.

I was just getting some picture books in order myself today. My son and his wife are expecting in Nov. and I was going thru some pictures in my son's book to give to them.

Hi Linda,
How wonderful to have such treasured family stories. And I love the family photo.
Donna V.

Wonderful stories! The circus story meshes with my last blog post (literally five minutes ago) about Sara Gruen's book Water for Elephants. I'd sure love to hear more of those stories! So much family history is lost when stories aren't passed down. You are lucky to have your loved ones available to share them with you.