Here's Ashley, Liam's, and soon to be A********'s, mama at the gender reveal party for all the grandparents. The house was decorated in pink, yellow, and blue. Little mama's been craving pumpkin pie recently. Her mom bought her individual pumpkin pies. 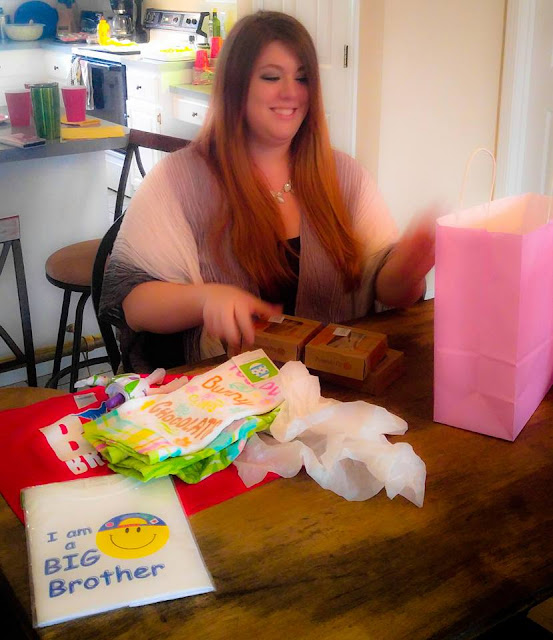 Liam's paternal grandma, Shannon was as excited as I was. I bought a pink soft sleeper, but to be safe, also bought two, blue, newborn sack sleepers with drawstrings. My daughter, Nana Tracey, bought the cutest little dress, and of course baby boy outfit. Great-grandma Dot was prepared for a bundle of pink, too.

Justin's mom said he came over to her house one day and saw her working on a pink baby quilt. She asked if she should change the quilt colors. Told her to keep working on it. She assumed it was a girl. 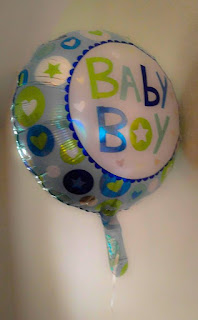 They kept us waiting until after the delicious meal.

I am the cake maker in the family but can't take credit for this one. They ordered it from a new bakery in town. The owner used to be a plumber, and changed course in life. He said he was scared as could be, but stepped out in faith, and has not been happier since changing professions. I hear the yummy cinnamon rolls are as big as plates. That just goes to prove, one should follow their dreams. 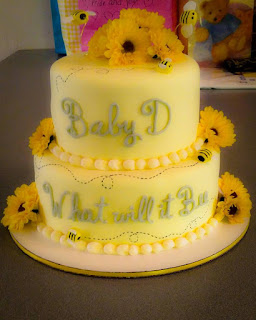 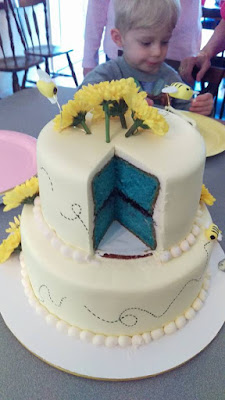 As you can see, the cake was blue.  The new baby will be named Alexander Scott. Mama says he will be called Alex. But his daddy seems to think Lex and Liam sounds cute. We shall see what mama thinks, because everyone knows if a new mom isn't happy, ain't no one happy.

When Ashley opened her gifts, she held them up and said, "These are for the new baby."

Liam stopped in his tracks, looked all around and asked, "Where IS he?!"

I took the cutest video of him, but cannot figure out how to post it. If I do, I will post it later, otherwise, you can find it on my Facebook page.
Posted by Linda O'Connell at 7:52 AM

Congratulations! The cake is a a work of art.
May the new baby be born easily and enjoy the beautiful gifts!

Linda--Congratulations. I'm sure Alex will be as cute and as inquisitive as Liam.

And please tell Ashley she is a beautiful pregnant woman. She is gorgeous in that first photo.

What a GREAT idea to reveal it with a blue cake!

Everything is so pretty and it sounds like it was fun for everyone too. Nice to celebrate! I loved the story about plumber to baker...what a switch but such a nice thing someone got to follow his dream!

Ashley is glowing! Remember when the gender reveal was the birthday?

That was a sweet post, Linda. So happy for the Mama, the Grammie and the great Grammie and for Liam, too. (And the Papa, of course.) So no baby girl but a precious baby boy is headed your way. What unparalleled joy. Susan

I hope everyone checks out your Facebook page - Liam's video was awesome! Congratulations on a little brother for Liam!

Ashley and that cake are beautiful! Liam looks more grown up every time we see him. I'm sure everybody is eager to meet Alexander/Alex/Lex.

That cake sounds delicious and looks so pretty. Congratulations on the new little one on the way!

Oh! How fun! Gorgeous mama-to-be, awesome cake and a really, really good writer to tell us about the event. How exciting. We just got a new grand puppy added to our zoo. To life!

Reveal parties are such fun! Congratulations to you all!

How fun! I hadn't heard of a Gender Announcement Party before. Guess it's been too long since there's been any babies in our family. Congrats to all!