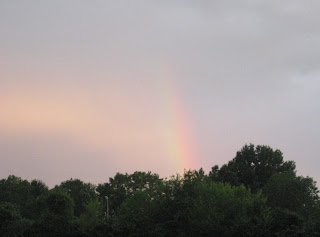 Dawn had barely crept up the horizon when I tiptoed out the back door to the patio with a cup of weak coffee and a snack pack of Scooby Doo cinnamon graham cracker "bones" that Nicole had left here. I sat on the porch swing to pray for my cousin who is having breast cancer surgery today, for my boss who lost her dad over the weekend, for my brother who is all alone celebrating his birthday today. So many hurts and pains, worries and aching hearts. A cloud burst high and a brief sprinkle
plinked a tune, but it ended too soon to even give the flowers a drink.

I called my brother to wish him a happy birthday, remind him about our cousin, and to tell him about my boss's dad...and then, right before my eyes, a rainbow appeared. An incomplete arc, like a call answered mid-ring from heaven on high. As fast as that rainbow appeared, it was gone. I am thankful for the message.
Posted by Linda O'Connell at 7:05 AM

Hopefully the rainbow is the first of a batch of good news.

No coincidences. The signs are there if you are open to receive them.

A "brief sprinkle plinked a tune..." That is worthy of saving for a submission...

Oh - don't you just love it when we're 'signed' from on high? You brightened my day, Linda!

You know Linda - that was a wonderful sign to you about yours prayers. sandie

What a beautiful break-through of happiness is a morning filled with sad thoughts. Even more beautiful is you praying for those you love. Hope your day is blessed, Linda!

Sounds like you had a full plate for reflection this morning...glad you saw some brightness. Often only a tiny ray can help us.

The Lord works in mysterious ways, His wonders to behold.

Best to your loved ones, Linda.

Sending good wishes to your loved ones.

Hi Linda. So glad that I felt up to popping over to see you today. Oh, I am so sorry for all that bad news, but how wonderful for you to see that rainbow, and I agree that God does, indeed, work in mysterious ways. I pray that your cousin will be fully healed after her surgery, and also for your boss and your brother. It's strange in life how, sometimes, things like this come along all at once, isn't it? Blessings to you Linda.

What a wonderful mesage from the Lord, Linda. It was like a little visual whisper from heaven! The photo is beautiful! My heart and prayers go out to all those who are in dark spaces right now. Hopefully, they know that light will come again! Susan

I think God was speaking to you. He was adding a little brightness to your life.

Such a beautiful way with words, my friend... well told, as always ; )

I love that the beautiful rainbow has become a symbol of hope. It has a magical way of bringing smiles to those lucky enough to witness its presence. Prayers to all those who need them most!