The skinny on corn 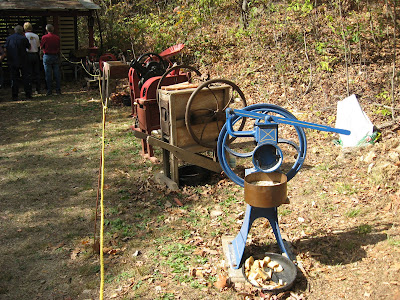 We went on a hayride to the pumpkin patch a couple of weeks ago. A middle school teacher pointed out the corn growing in the field and one of his students said, "Yeah, that's where hi-fructose corn syrup comes from, and that right there is why everyone is so fat."

The teacher said, "The corn didn't make them fat; overeating it did."

That lesson came back to me last weekend when we visited the Deutsch Country Days. One of the demonstrators showed us the functions of these various milling machines. He held up an ear of corn still in the husk and said, "What did the settlers do with corn like this? Let's begin: Feed the chickens?"

He tossed an ear of corn and said, "They'd have killed the chickens tossing this, and those that survived wouldn't eat it off the cob anyway. So, what if we strip the corn off the cob? Well, if I toss it in the barn yard like this, these pellets could put a chicken's eye out when I toss it. Besides, even if they did eat it like this, it would back up in their gullet, because they need fiber."

In our part of the country they used bone meal, beef bones were shaved and added to the corn, which was ground down into a finer meal for the chickens' mash. Farmers in coastal areas add ground oyster shells instead of bone meal to their chicken feed.

The farmer's would grind corn even finer and make meal for Johnny Cakes and corn bread.

The corn tassels were used to make a paste, which had healing properties for stinging insects.

They also boiled the tassels and made tea. The husks were used to make dolls. They were also soaked in water and then bunched,folded then inserted into holes in a piece of wood to make a corn husk broom.

The settlers boiled the corn until it was a fine syrup, and yes, they had hi-fructose corn syrup. Fermentation led to corn pone.

We take for granted the availability of corn and all its products. A hundred years ago, from the time a child could walk, they were working for their corn. Kids as young as toddlers would crank the handle on the shucker, the next machine milled it, and the next made it into finer meal, and the next machine (the blue one) shaved and ground the beef bones which was added to the chicken feed.

AN IMPORTANT NOTE: farmers did not feed beef bone meal to cattle. They knew better than to cannibalize cows.

He said nowadays our food is readily available. We don't have to expend any energy tilling the land, planting the crop, harvesting, storing and preparing the food. These are contributing factors to weight gain.

He mentioned that the settlers ate food that rotted, and passed quickly through their digestive tracts.

Today our food is over-refined and over-processed with so many preservatives. He said he has a commercially prepared hamburger and French fries from a year ago; it still has not rotted. Isn't that an eye-opener? Probably true. I know I have found petrified burger and fries under my grandkids' car seats, months later, and they still hadn't disintegrated.

He did mention the corn cobs, as nothing was wasted. They were used as stuffing for bedding.

They were also used as toilet paper. Folks always took three to the out-house, two red and one white. First they used a red one, then a white one if needed, and if there was no evidence that a third was needed :) it was saved for next time.

Now you have the skinny on corn which is allegedly responsible for making everyone obese.
Posted by Linda O'Connell at 4:39 PM

I thought this was going to be a corny post, but no...It was quite informative.

My daughter and her beau are on a "no processed foods" diet. They haven't cut out all processed foods, but they're working on it. They both say they feel a whole lot better. Our friend, Mark, is also cutting out as many processed foods as possible---he's lost 10 lbs, and counting.

I love corn. Glad to know that's not my problem. Probably I should lay off the ice cream. *sigh*

Wow. This was really interesting!! Especially to a Nebraska Cornhusker, though I'm not entirely familiar with how one husks it, either.

A friend of mine has had an order of Lion's Choice french fries sitting in an open tupperware container on top of his fridge since September of 2006. 2006! And it looks EXACTLY the same as it did the day he bought it. Yuck.

All things in moderation...right? I don't so much blame eating high fructose corn syrup for my weight, but for over-eating and eating too much processed food (whether made with corn syrup, sugar, white flour or fat.)

Thank you for this informative lesson! I'm with you, we are all responsible for what goes into our bodies. I hate when I see people shifting the blame when they need to own up and take responsibility. Good post.