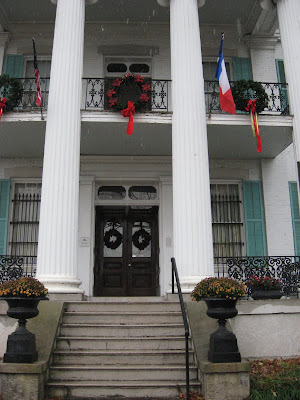 The Chatillion-Demenil House, rich in French Cultural history, is on the National Historic Register. It is located in a neighborhood known as Benton Park in South St. Louis. The mansion was built in two sections, a modest two story brick house was built in 1850 and owned by Henri Chatillion who was a guide and hunter for the American Fur Company. He was immortalized in Francis Parkman's bestseller, The Oregon Trail about an expedition the two men made together.

The Chatillons sold their house in 1856 to French native, Dr. Nicholas DeMenil, a physician and pharmacist. He married Emelie Sophie Chouteau, a descendant of our city's founding family. The Greek Revival portion of the mansion, pictured here, was completed in 1863.
The furnishings are original and date from 1820-1880. Ceiling medallions, marble mantels, parquet floor and the front hall, gas powered chandelier are original pieces.

The DeMenil heirs retained title to the house until 1945. Lee Hess then bought it and capitalized on the natural system of caves under the property. This area was home to several large breweries that used the caves as a refrigeration system and underground connecting walk ways tot heir businesses. Hess opened and operated Cherokee Cave from 1950's-1960's. I toured that cave when I was ten years old. It is one of my fondest memories, as my overprotective mother allowed me to ride the Broadway bus from North St. Louis to South St. Louis with a teenage neighbor and her sister to tour the cave.

The path of Interstate 55 closed the cave and threatened the demolition of the mansion, but $40,000 doanted by Union Electric, allowed Landmarks Association of St. louis to purchse and oversee the restoration. The formal dedication took place in 1965 when the house was turned over to Chatillon-DeMenil House Foundation. It is open to the public for tours Wednesday through Saturday for a nominal fee. There is an indoor and patio cafe on the premises.


I was distinterested in local, national and world history when I was young. Now, I am awed by the significance of these historic local structures and the street names of founding fathers and land owners. Take a tour with me through the Chatillon-DeMenil House. 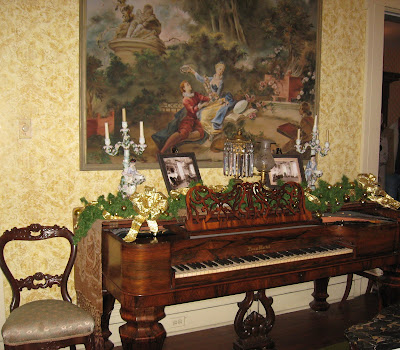 The piano was built specifically for the family and has always been in this place. 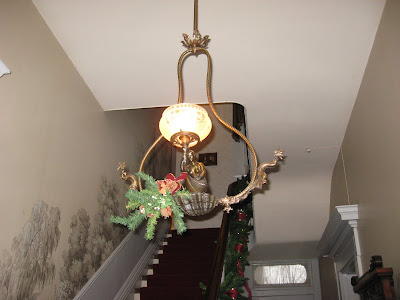 The gas lamp is original. This is a depiction of Aphrodite and she holds a sprig of mistletoe. Can't you imagine the glorious holiday parties back in the days? 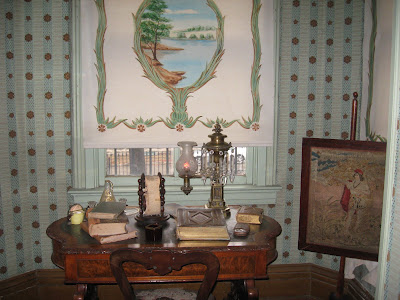 How would you like to write your correspondences from this desk? 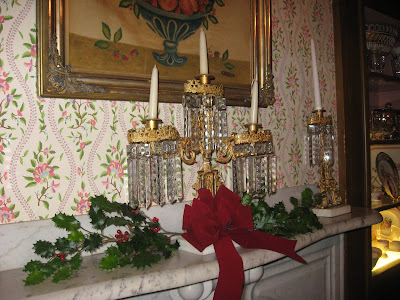 The candelabra are original pieces, a bit too elborate and ornate for me, but oh those crystals. 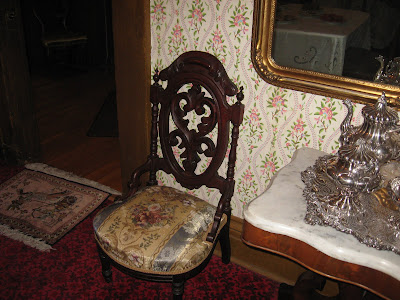 I certainly could have sat a spell in this antique chair after climbing so many flights of stairs in so many houses on this wonderful Soulard Historic House Tour.

Which picture is your favorite?
Posted by Linda O'Connell at 6:27 AM
Labels: Chatillon-DeMenil House, Soulard Holiday Historic House Tour