A glorious historic tour in my own town

I attended a holiday house tour and this church was one of our stops. I was astounded at the beauty, the history and this altar. 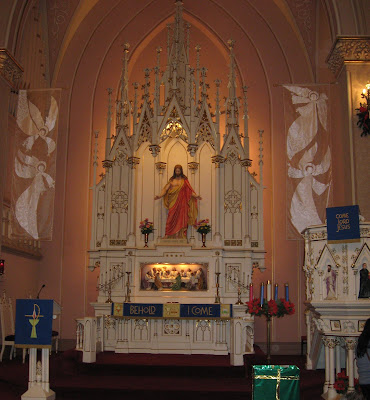 Trinity was founded by Saxon immigrants in 1839. It is just a few blocks from downtown St. Louis and a block from historic, Soulard Farmer's Market which is still in operation. It cost $117,000 to build the church. Note the intricate carving on the white and gold carved altar and baptismal font.

In 1917, with the onset of World War I, there was bitter anti-Germnan sentiment in St. Louis and unruly folks hurled rocks through the stained glass panel that was inscribed with the word Dreieingkeitskirche. The sermons originally preached in German were then preached in English until after the war, when the church returned to their native tongue. To this day, 172 years later, on the last Sunday of each month the sermon is preached in German, continuing the founding fathers' tradition.

Today Trinity Lutheran has an outreach and is a diverse and caring Christian community serving homeless, needy, wealthy and every soci-economic group. 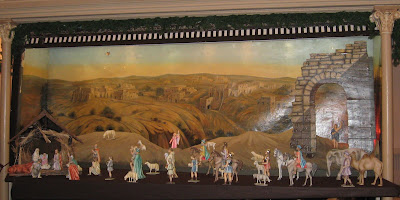 This 100 year old diarama (about six feet long)was imported. The Nativity figurines were designed by an artist. An electrician designed the backdrop and installed a carbon arc light bulb. On Christmas eve, when the congregation is singing Oh Little Town of Bethlehem, the day sky, turns to night, and the sanctuary dims as stars in the night sky illuminate the diarama. The congregation sings Christmas hymns, and at the conclusion, the "star" shoots a beam of light throughout the church. It must be magnificent to be in that congregation and feel so connected to the first Christmas when Jesus was born and to feel what the shepherds felt.

Look at the intricate artistry. Lest you think that these are ceramic, let me assure you that each figure in this nativity scene is made of paper mache`. Aren't they incredibly beautiful at 100 years old? 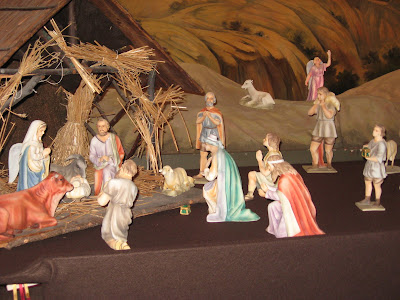 Posted by Linda O'Connell at 6:18 AM
Labels: Trinity Lutheran Church